Right in the middle of Bulgaria, surrounded by beautiful mountains, you can find a breathtaking valley called “the Rose Valley”. The climate and the fertile soil are main reasons why it is known by that name. Rosa Damascena – “the king” of hundreds of different types of roses you can find at this place is a magnificent hybrid kind of oil rose. The rose oil finds applications in varieties of industries such as healthcare, cosmetics and the food industry. The rose as a flower is an inspiration of many craftsmen, musicians, singers, painters and artists. The rich rose fields are a must-see if you are in Bulgaria during the months of May and June. That is the period if the year when the roses are blooming and you cannot just watch, but also can take action in the picking process. 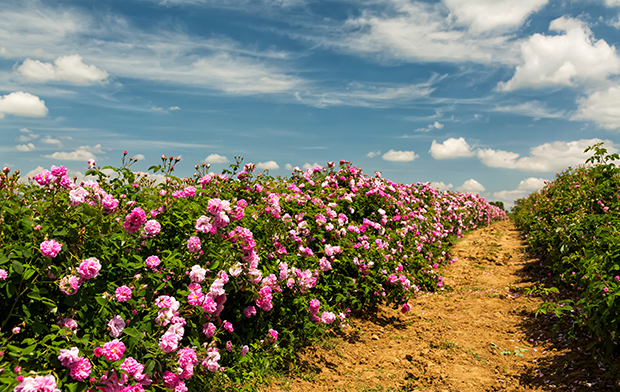 The Rose Valley, defined by Bulgaria’s two major mountain ranges, was a busy trading center throughout ancient times. Around four centuries before Christ, this part of the world was known as “Thrace”. The Thracians were a remarkable civilization. Most of our knowledge about them comes from their tombs. Thracians buried their royalty in fascinating dome-shaped tombs – completely covered in earth. Numerous of these tombs are scattered across the valley, along with many fake/ decoy mounds design to fool the treasure hunters. Buried deep under the piles of soil, the tombs were amazing engineering achievements. For that reason, the area is also called “the Valley of the Thracian Kings”. 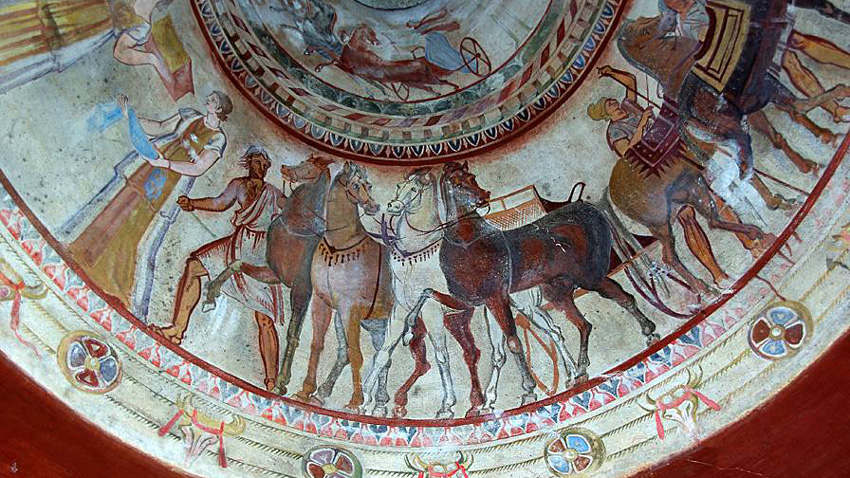 Because the people are frequently limited in their time to spare at new places, here are some of the top things to do in the Rose Valley:

The Rose festival in Kazanlak – the rose capital

Visiting the town of Kazanlak in the first weekend of June, will give you the unique opportunity to be part of the famous “Rose Festival”. Dance, music, cultural, artistic, social and sports events happen across Kazanlak and the surrounding villages. You will be able to attend a variety of concerts and parades, workshops and expos. Moreover, at the end of the celebration there is something special – the coronation of the “Queen Rose”. The festival has been organized annually since 1903 in the town. 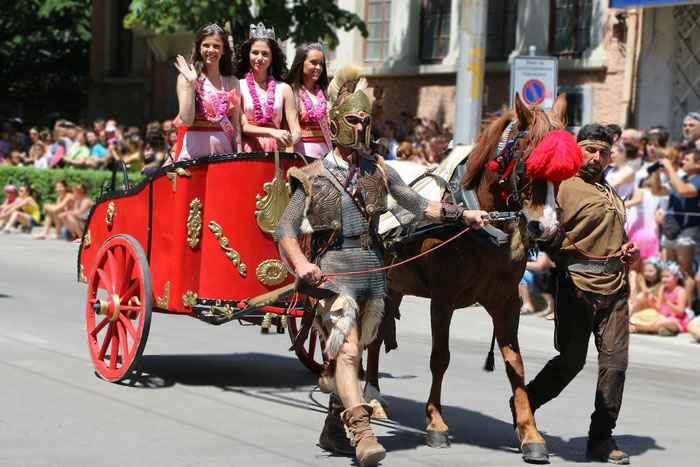 Being in the heart of the Rose Valley, don’t miss the chance to taste the local cuisine. You can fascinate your senses with the flavor of:

There are many more suggestions to create a temptation for your taste, but let’s get back to the topic and continue with the beautiful places in the Rose Valley.

The Thracian Tomb of Kazanlak

The famous tomb is masonry round-domed tomb located in Kazanlak and part of a large necropolis located near the ancient capital of the Odryssa Kingdom of Sevtopolis. It is dated to the end of IV century B.C. – the beginning of the III century B.C. and since 1979 has been on the UNESCO World Heritage List. Belonged to the Thracian ruler Roygos, the tomb was discovered accidently in 1944, under a mound, by soldiers who dug trenches in the area.

Nowadays, visitors can see an exact copy of the tomb, which is located right next to the original one. The reason for that is especially the proper preservation of the ancient paint work. There is always a bright side – in the copy of the tomb (which is replicated with perfection) the visitors can take pictures and the entrance fee is only 6 BGN (approx. 3 EUR). Because of the narrow space and the lack of any ventilation inside, the number of people who can enter at the same time is limited. Note that oxygen depletes relatively quickly with more people in, but few minutes are more than enough. 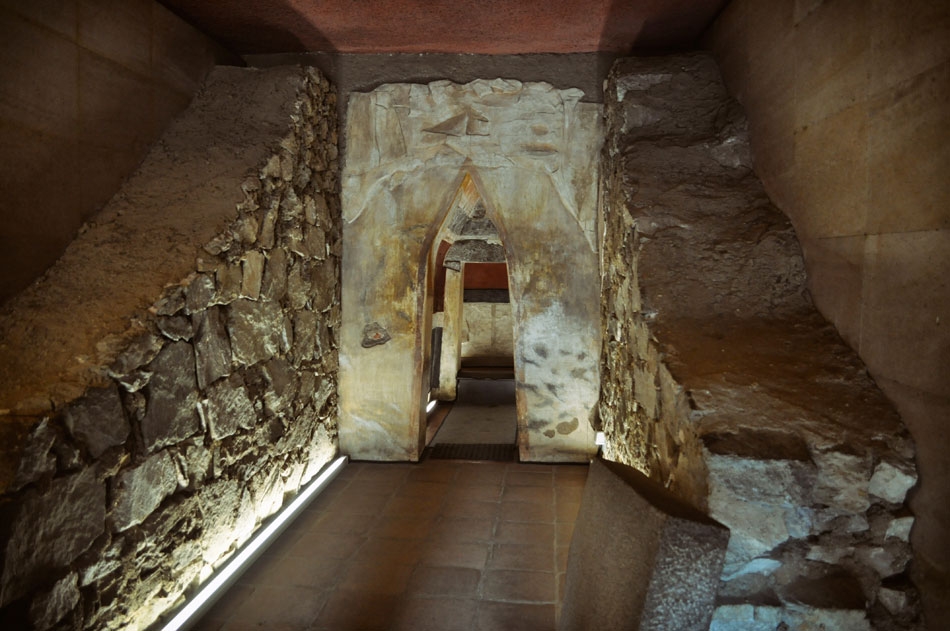 (The Thracian tomb of King Roygos – IV century BC)

After getting out of the tomb, do yourself a favor and turn north. In the mountains, between all the trees you will spot a shiny reflection. At a modest distance of 12 kilometers from Kazanlak you can reach another astonishing site – Shipka memorial church. The construction began in 1885 and ended in 1902 under the direction of Russian architects. An ossuary is located in its dungeons, which houses the bones of nearly 9,000 Russian and Bulgarian soldiers who died in Bulgaria during the Liberation War. There is also an interesting fact which always fascinates the visitors – the huge bells, the largest of which weighs 12 tons, are cast from the shell casings collected in the area. 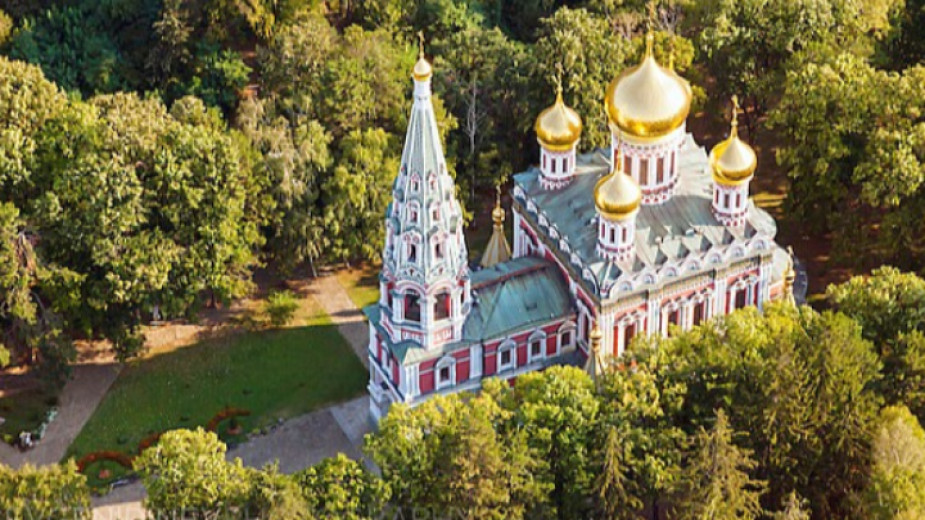 *Exclusive tip:
Do yourself an experiment and stop in front of the church in about 20-30 meters. Then focus on top of the cross at the belfry. Hold like that for a moment and if you are lucky enough and there are clouds in the sky, you will witness an optical illusion. It would look as if the top of the bell tower is swinging with the wind.

Not far from your current location is another place of interest worthy of your attention. The Ethnographic Complex “Damascena” (as you can already tell from the name) is fully committed to all the processes that accompany the production of the Bulgarian rose oil. Having the chance to observe the entire technology of the extraction, don’t miss the black swans that add an extra emotional touch to an otherwise unforgettable experience. Stroll through more than 150 species of roses. Another place to spend some time in the complex is a stage shaped as a Roman theater, where various events and concerts take place, and colorful roses are planted next to the seating areas. It is a large complex and there is a lot to see. You can rest by having a refreshing drink under the rose vines or enjoying lunch at one of the resort’s restaurants. The entrance fee for the ethnographic complex is 12 BGN (approx. 6 EUR).

In conclusion, the Rose Valley is not just a place. It is an experience where you can learn about the queen of all flowers – the rose, by plunging into the heart of rose production. You can find out about the mighty Thracian warriors and kings who lived in these lands and the treasures they left behind, to understand their ways and traditions. You can get familiar with the Bulgarian history and its cultural differences. And last but not least, to spend unforgettable moments exploring new destinations.

Where to book a one day tour?

You can make an online reservation for a tour to the Rose Valley from our website or you can contact us for more information.