The Medieval Bulgarian capital of Veliko Tarnovo is among Bulgaria’s most visited cities. Tourism has been constantly growing here during the past decade. I have contacted Plamena – the founder of Free Veliko Tarnovo walking tour,  with some questions, that may seem interesting to you – our blog’s reader. The free tour of VT has been running since 2012.

1. Where and when can the tourists, who would like to join the Veliko Tarnovo Free Walking Tour find you? Is it necessary to book in advance?
Everyone is welcome to join the tour, which starts at 11 am in front of the Tourist Information Centre, located at the centre – 5 Hristo Botev str.
People can also find us on Google and send a message with questions on the Facebook page. Given the lower number of participants booking in advance is not required, so just show up on time.

2. Tell us more about the itinerary. How long does the tour take, and which main landmarks could be seen?
The duration is 2:30h and it covers the main landmarks in the city, through stories about Bulgaria, it`s history and culture. Keep in mind that the tour does not visit attractions and museums. It is just a friendly and educational walk through the old town, which gives you the basics in order to explore it further on your own.

3. What kind of stories about our country can the tourists learn during the tour?
I would describe the tour as a pretty educational activity, since it covers the participation of Bulgaria in the 20th-century wars, the story of occupied Bulgaria under the Ottomans, the history of the city as a capital of the strong 2nd medieval Bulgarian kingdom, which is intertwined with stories of communism, Thracians, Christianity and pagan traditions, practised until these days. Of course, we can just scratch the surface of the topics for the time given, but all this combined with a personal approach makes it interesting for foreign visitors, which I know as a fact from my experience.

4. You are passing along the Samovodska Charshia (Craftsmen street). Can you tell us more about the places you stop by or visit?
The tour`s first stop is Mother Bulgaria monument, then Faculty of fine arts, Monument of the Hanged, it goes along Samovodska Charshiya, the craftsmen street, where we have several stops. It proceeds towards the fortress with a brief picture stop and we stop by the Cathedral for the story of the three medieval hills, including Tsarevets. Afterwards, we head to the Konak or the Constitutional assembly, then we continue towards Gurko street from which we have a view of the second landmark of the city – Assens monument and the gallery. The tour ends at Gurko street around 1:30 pm with recommendations on restaurants, activities, etc.

5.Which souvenir shops and restaurants do you recommend to the tourists and why?
My personal approach during the tour is not to recommend any particular souvenir shops, instead give the participants the area where they are located, so people can go back and decide where to shop on their own. Of course, if asked, I would let them know my opinion on where the real Bulgarian souvenirs are and what is real production of our craftsmen and what not. As for the restaurants, I always take time to define where the more expensive and on the contrary – cheaper locally and family-runned places are. Since it is a free walking tour the participants are from all walks of life – from low budget backpackers to rich guests, who would prefer posh places.

6. Has tourism in Veliko Tarnovo changed since you have been running the free tour? Do you have any other interesting projects for the future?
Tourism in VT has definitely changed since I run the tours – the town not only attracts the big organized tour groups but is becoming a popular place for independent travellers as well. 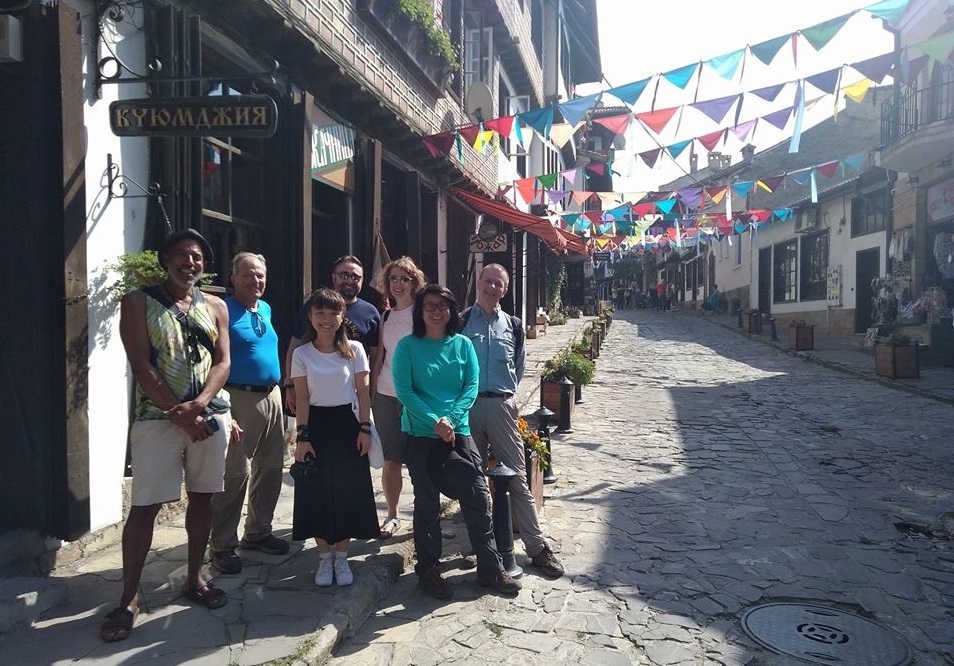 Learn about other fascinating projects, including the Free Sofia Tour, and Free Plovdiv tour: Here.